Shop talk means a lot in literary fests, perhaps more than ever in the changing format of print and digital and its delicate balance of those realms. The International Festival of Authors (IFOA) does its best to keep these conversations going as a good feel on what's out there in regards to publishing, promotion, readership and audiences in order to advance the literary arts. 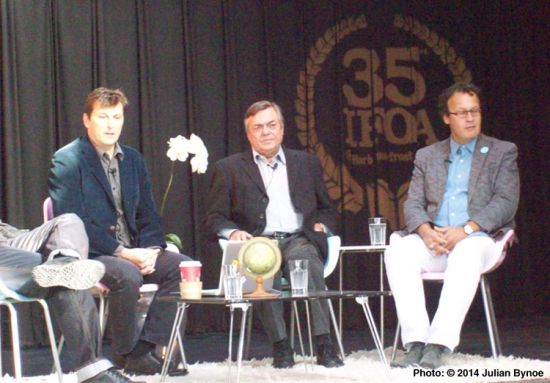 One particular department nowadays is the global market, just like foreign films, is becoming accessible to a wider crowd and translation is a booming business. In the roundtable discussion "Globalization+Literature: Breaking Down Barriers" featuring Slovak poet and moderator Martin Solotruk and authors Jonas T. Bengtsson of Denmark Slovenians Andrej Blatnik and Drago Jančar in IFOA's continuing Found in Translation series opened up the topic on what it means to (hopefully) gain a new audience.

"It determinedly means a lot," said Jančar. "We shouldn't criticize such efforts when it brings us to great literary events such as this one (IFOA). But also we find the reader, which is more rewarding in finding millions of more readers. So whenever a book is published in another culture (language), which means you can find another readership. Of course it brings some problems, some cultural misunderstandings, especially when the writer is not capable of doing everything."

"I think it's more the question of the usage of the language that changes with the translation," Bengtsson offered, "between the three (Scandinavian) countries and also, I think, because it sometimes gives you a chance to (whether) a Swede or Norwegian person reads me, I get the feeling that they're actually reading the book and they're less concerned in what is going on with the themes that might be contemporary and apply to a particular situation in Denmark at the time it was published. They tend to read it more as literature, but that's also like criticism towards the way that Danes read since we have a tendency to almost always read literature as part of a debate, which I dislike."

Geopolitics also plays a role here as well. With the semi-bloodless collapse of Eastern European Communism that followed in the Cold War's wake and brought about the violent dissolution of Yugoslavia, opportunities there brought the publication of more experimental fiction and little-known writers to the West as much as the importance of English as a "bridge" language, it also brought about less quality work and the blowback of previously-unavailable classics, particularly bestsellers, competing with homegrown talents, plus a problem with generational interest of a younger crowd yearning to read the like of George Orwell, for example, than their literary heroes.

"Unfortunately we do live in the time of the bestseller," Blatnik lamented. "And I think that one thing you can observe is, with smaller countries; you will find a very large appetite for the rest of Europe. Yes, you may pick up a French writer, if that writer sold a hundred thousand or two-hundred thousand copies in France. But I see fewer and fewer translations of quality prose, from my experience on what it used to be like. I remember picking up books at my grandma's house and they came from all over Europe and I don't see book's on [other people's] bookshelves anymore."

Yet the prospects of having a translated work will help preserve them and keep the author gainfully employed. There's always going to be the complaint of something that gets lost in translation, but as Jančar defends, "everything" in the translation does at one point or another and sometimes the latter version is much better in someone else's language that what they originally wrote.

"I can read Swedish (books) as well, but it would take me longer and I'm a very patient person. I don't even [do it] most of time," admitted Bengtsson. "I don't like to read Danish if it's not good, so I prefer to read a translation. Some of this (behaviour) is laziness, some of it has to do with turning on the television like, some of what's on, half of it is in the English language, the other half is going to be in Danish. I think the key challenge between translating and this is all about the rhythm and usage of the language [in question]."